Click below to listen about the Tin Hau Temple
The tin Hau Temple boasts a long history, as shown by the whale bone that is more than 400 years old and the ancient bell that was made 6 years before restoration of the temple in 1798. The history of the original temple is however yet to be traced. The Ancient bell that was made in the 1700's
According to legend, Tin Hau Goddess was born in the Song Dynasty (960-1279A.C.) to a fisherman surnamed Lam in Fuzhou. As a child she was intelligent and knowledgeable in astrology and was able to forecast the climate. She also practiced medicine and saved countless people. After her death, she was worshiped as Tin Hau Goddess or Ma Jo Sea Goddess and had many followers around the South China Sea.

The older generation of Peng Chau residents owed much gratitude to Tin Hau Goddess for they survived many calamities under her protection. 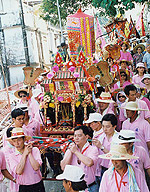 Click below to listen about the stories of Tin Hau Temple and the Annual Tin Hau Parade
One of the most legendary stories about Tin Hau Goddess is related to Cheung Po Tsai, an infamous pirate of early 17th century that haunted the Hong Kong coastal waters. One day when he led his gang to rob Peng Chau, a sudden blast of wind blew off the red flag hanging on top of the mast. Cheung was so frightened that he immediately ordered the other pirates to stop. He then led them to Tin Hau Temple to pray to the Goddess and asked for divination by drawing a bamboo slip in which these words were written: "Protect our homes and guard our country", leading him to declare his duty to protect Peng Chau.
Later in 1809, fighting broke out between Cheung's gang and the Qing navy off the coast of Chap Lap Kok. The next year, Cheung accepted the imperial court's summon to surrender and was conferred to become an official in Fujian Province. To congratulate him, Peng Chau residents hanged a couplets on two pillars inside Tin Hau Temple displaying these words: "The magnificence of God's grace over clear ripples in the calm sea is sufficient for the innocent people. Bringing prosperity to people and abundance of crops, the magnificent Mother bestows relief to common people".

It is said that divination bamboo slips of Tin Hau Temple are very accurate.

Another legend told of an epidemic on Peng Chau that was impossible to stop after taking all measures, claiming numerous lives on the island. Residents were at a lost to know what to do and finally resorted to ask Tin Hau Goddess to parade the island. It was the 21st day of the 7th month in the lunar calendar. Magically a few days afterwards the epidemic gradually abated and people got well without treatment. From then on, the date is celebrated in a parade by residents with Tin Hau Goddess for her blessings on the island.